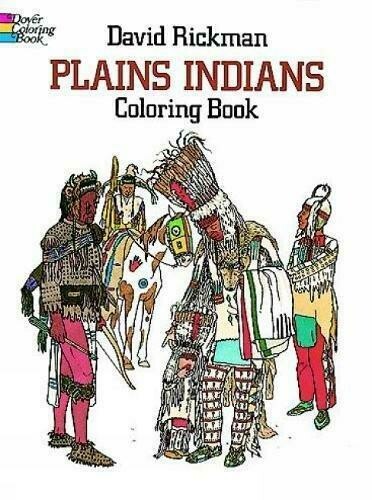 Sioux, Crow, Blackfoot, Pawnee, Apache, Cheyenne. Not the feather-bonneted, gun-toting, horseback-riding stereotype of Hollywood movie fame or Old West legend, but the real Plains Indians of North America portrayed honestly in the clothing they actually wore, in realistic settings, performing everyday task. The richness and diversity of the costume and lifestyles of the Plain Indians are rarely presented with so much integrity.

Here in 40 carefully researched, accurately and delicately rendered line drawings are the Indians of the Great Plains. Full captions identify the tribe and the period, which ranges from the mid-seventeenth to the early twentieth century and describe the way of life of the Indian peoples, as well as the changes over time in their customs and traditions. Of particular note is the impact of the white man's culture.

This educational and entertaining coloring book will expose children and adults alike to the dignity and beauty of the lost culture of Native Americans. The author, a museum curator and noted illustrator of historical subject matter, is dedicated to expanding our understanding of this traditional way of life.

Save this product for later

**We use recycled shipping materials whenever possible.**

Sign Up to Receive Email Updates from the National Buffalo Museum.

Our mission is to advocate for the restoration of the North American bison.

Your support can help establish ongoing youth programs, sponsor new exhibits, assist with the acquisition of artifacts and artwork, and support future growth and expansion.